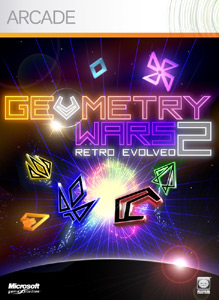 Have you ever felt the need to destroy wave after wave of shapes? Just want to get even with that High School Geometry problem? This is your chance to do just that. Geometry Wars Retro Evolved 2 (Bizarre Games, 2010) is an Xbox Live Arcade exclusive, which pits the player in an all out war against varying shapes with varying difficulty. Read on to see why you should e playing this game.

Gameplay in Geometry Wars 2 is a familiar one on the Xbox Live Arcade Marketplace; Twin Stick Shooter. You control a small V shaped ship with infinite ammo as you battle your way through six different game modes. Throughout all six game modes (Deadline; 3 minutes to rack up points with infinite lives. Pacifism; Fly through gates which explode a small area to survive. No guns. King; Fly into zones which will appear on the screen to use weaponry, but be careful; these zones don’t last forever. Waves; fight wave after wave of oncoming enemies. One life and all the points you can handle. Evolved; classic game type. Fight forever if you wish, but you only have 3 lives and 3 bombs (More lives and bombs at 100,000, 1,000,000 and 10,000,000). Sequence; similar to Waves, however you fight through set rounds. Die 3 times and your out) you’ll be collecting small green crystals which fly off the  dead shapes known as “geoms”. When collected these add to the score multiplier to get you even more points. But your not just going to rely on your guns; in most game modes you will be given bombs, which when activated wipe the screen. You won’t get points but all the geoms are there to collect. Retro Evolved 2 also features 4 player local multiplayer. Battle against each other to get the most points to come out on top! Overall you will find the gameplay in Geometry Wars fun, fast and furious, which will be sure to have you sticking around for more.

Killing shapes has never been this much fun

The Graphics in Geometry Wars Retro Evolved 2 are nothing short from incredible  You won’t find detail like this in another Arcade game. Every shape is clear, crisp and colorful  Add that with the space background as well as the sparks that fly off your behind as well as the shapes (When they explode) will leave you scratching your head why the game doesn’t slow down. The amount of animation effects seen in this game is astounding. This does make if however a little hard to play when you reach the higher scores, as the amount of enemies appearing on screen and exploding can cover the map with a haze of sparks. This won’t ruin the gameplay; but it will leave you yelling at how you couldn’t see that one shape. In the end, the graphics seen here will impress, but may have been over done during development.

Geometry Wars Retro Evolved 2 features on the most incredible sound tracks in any arcade game available on the market. IT features a spacy, upbeat tune when in the menu, however every game mode has an individual track. You will hear sounds ranging from the fast and happy (See Here) to slow and relaxed (See Here). This really helps identify the modes as well, adding for an extra level of immersion. However, on the other side of the sound spectrum, we reach the game sounds themselves. These aren’t anything special, and rather feel hollow when destroying shapes. You won’t be blown over by them, but the music well makes up for it.

Don’t let the spikes hit you on the way out

With gameplay this astounding, Graphics this clear and music that is literally out of this world, Geometry Wars Retro Evolved is a great game for anyone with an Xbox. The replay value is enormous  and coupled with  4 player multiplayer makes this game a literal “geom” in it’s own right. Get it now for 800 Microsoft Points on the Xbox Live Arcade Marketplace.